A few years back I read a book entitled, “Already Gone” by Ken Ham and Britt Beemer. The subtitle of the book gives a good summary of its overall focus: “Why your kids will quit church and what you can do to stop it.” This was during my first pastorate in Chesterhill, Ohio. 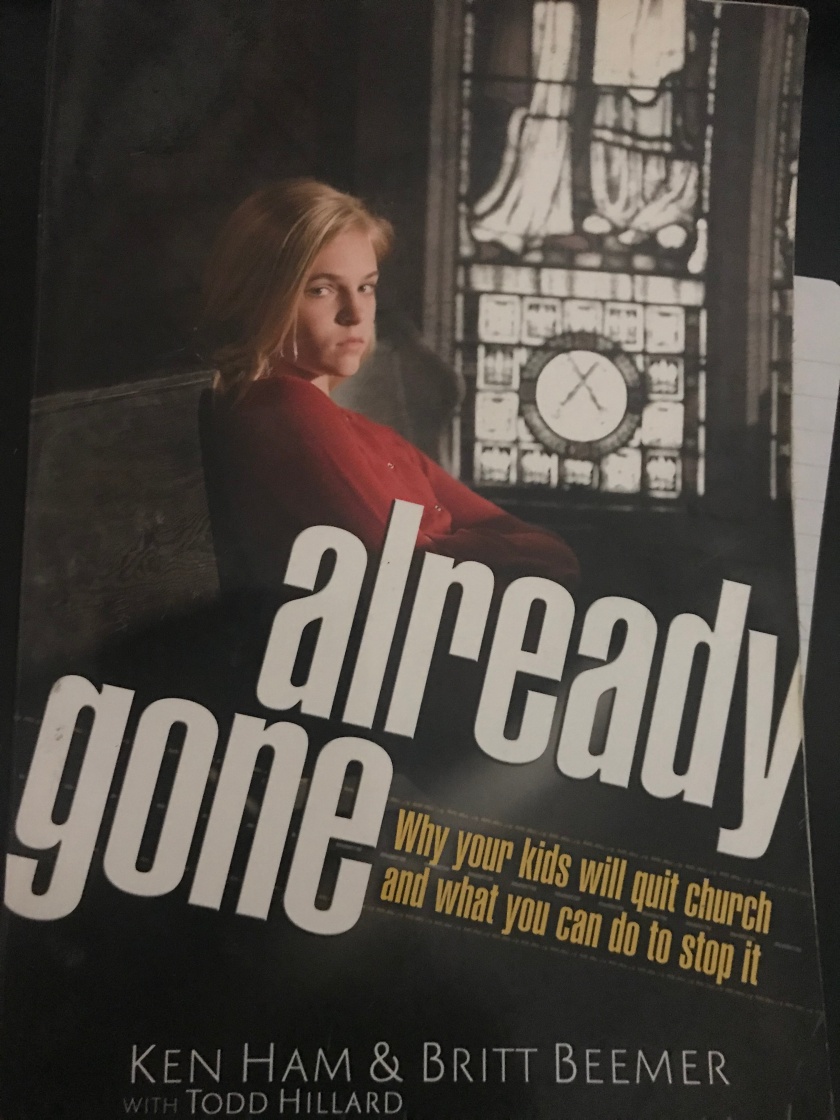 In the introduction of the book Ham presents a brief history of the slow and steady degradation of Christian influence in the United Kingdom over the last couple of generations post-World War II. What once served as a bastion and port of the Christian heritage for hundreds of years appears to be in its death throes. According to a 2005 census of the English Church those who regularly attend service is approx. “6.3% of the total population” with an overall decline “between 1998-2005…in regular church attendance of 15%.”[i]

In light of these statistic and others not recorded here Ham laments,

“Across the Atlantic, in the ‘One Nation Under God,’ the seeds of a free and God-fearing nation were planted only 250 years ago. Today, few people are aware of the spiritual epidemic that has wiped out the land of our Christian forefathers. England was the home of our great spiritual ancestors—many of the greatest preachers, teachers, and evangelists of the last 200 years.

Few people are aware that the same epidemic has reached our own shores, spreading like an unstoppable virus.”[ii]

My desire here is not to give a thorough book review, but only to highlight one of the key themes of the book that (among other things) helped shaped my philosophy of ministry.

Our spirituality has become compartmentalized. Yes, we go to church, but only to get our emotional and spiritual needs met. Then we walk out the doors and face a pagan [unbelieving] world where we have to live by a whole different set of assumptions. We might say this doesn’t matter, but let’s be honest: in the back of everyone’s mind is the question: ‘If I can’t trust the Bible in the earthly things, why should I trust it in the spiritual things?’ This was the same challenge Jesus Christ, our Creator and Savior, put to Nicodemus in John 3:12.

What really happened to the Church in the United Kingdom and Europe, and America—in fact, across the Western world—was that the Church basically disconnected the Bible from the real world.”[iii]

“When you consider all of the cultural influences that affect our thinking…it becomes pretty obvious that we are living in Athens not Jerusalem…If they won’t believe what the Bible teaches about earthly things, how will they believe about heavenly things?

I believe that this is one of the core problems behind this epidemic and the exodus of young adults from the Church. We’ve really been teaching only half of the truth—and the other half we have gave up. We preach the gospel of the Crucifixion and the Resurrection. We preach about ‘trusting Jesus’ and we preach about morality—but all the while, the attack on Genesis is raging, causing doubt, fueling unbelief, and undermining every single thing we say…We preach about [moral/spiritual matters], but the truth is that…

the Scriptures have become irrelevant….[People, including young adults]…don’t make the connection between the spiritual, scriptural things and real, practical things.”[iv]

Time for a Short Rant…

Because the Scriptures which serve as the foundation of Christian thought (i.e., worldview) have been attacked, eroded, and dismissed by those who have been charged with its teaching and defense. This is the reason I have little respect for “Christian” apologetic ministries that refuse to stand upon the authority from which they are supposed to be giving a reasoned defense (1Pet 3.15; cf. Isa 8.12-13).

Such ministries/apologists treat the Bible after a similar fashion that the unbelieving secular world does. They act as if the Bible only speaks on “spiritual and moral” matters, but leave the explaining and understanding the world to those in other venues outside the scope of our belief. Pretending that such matters are neutral and may be known and taught by anybody. If the Bible is not authoritative on knowing, understanding and explaining how our world came to be, how it works, why it works in the fashion that it does, then why in the world would I trust it in other matters?

The nature of all worldviews is that they seek to know, define and explain reality as a whole. I do not fault other worldviews for attempting to do so. For example, I understand why the naturalistic materialist, who believes in evolution, thinks that accident and chance and extensive amounts of time offer cogent arguments for how things truly came to be. I can appreciate why all their conclusions regarding their interpretation of facts and evidences go to great lengths in denying any other means of coming to be. They argue from their own assumptions and biases, and trust (i.e., have faith) that they are right in rejecting any explanation that goes beyond nature (i.e., supernatural). I get it. I may not agree with it, but I am willing to weigh their thoughts to see if what they suppose makes sense.

However, I am baffled by those who profess Christ in one breath, but refuse to profess Him in all areas of life. Either Christianity offers a cogent worldview that answers the questions regarding our being, or it doesn’t. If you want to attempt to separate the Christian faith from other sectors of life (e.g., politics, science, etc.), besides what you have identified as “spiritual and moral,” then you need to understand that you are living as the double-minded.

As I was saying earlier Already Gone helped shape my philosophy of Christian ministry. Early on in my Christian education I had already questioned the mindset that said we need to teach people in the pews as if they were no smarter than an 8th grader. (Yes, it is true that was something I really heard professors and elders say from time-to-time.)  My thought has been early on that Christians need to know how to study their Bibles. They need a workable knowledge of how-to exegete the Scriptures (even if they do not know the biblical languages this is possible). Already Gone merely reaffirmed my own convictions at that time.

If our churches (talking about the people not the building) are going to be effective outside weekly worship, then they need to know how to study their Bibles. And then, apply what is learned in every day life. This means they need to see that the Bible is authoritative on all areas of life, not just Christ, the Cross and the Resurrection. Again, if the Bible is not authoritative on earthly things, then why in the world would I want to listen to it on heavenly things (spiritual and moral matters)?

Therefore, for nearly a decade I have been attempting to equip the people God has placed in my life to do just that. Study their Bibles. See the necessary connections in the world around them. And use what they have learned to examine their lives, share their faith, and be ready to give a reason for the hope within them.

In some upcoming posts I will give a couple examples of how I’ve went about doing this.

[i] Ken Ham and Britt Beemer, Already Gone: Why your kids will quit church and what you can do to stop it, collaborator Todd Hillard (Green Forest, AR: Master Books, 2009), 12. 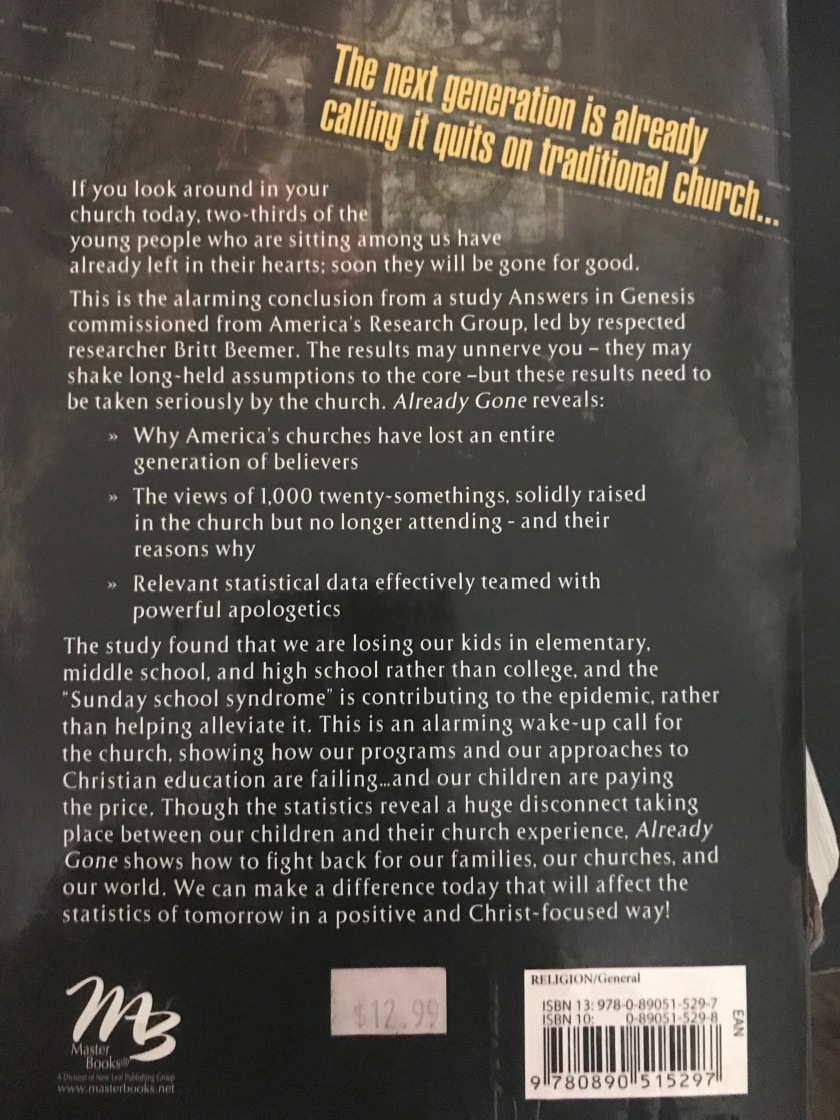 One thought on “Helping Shape My Philosophy”