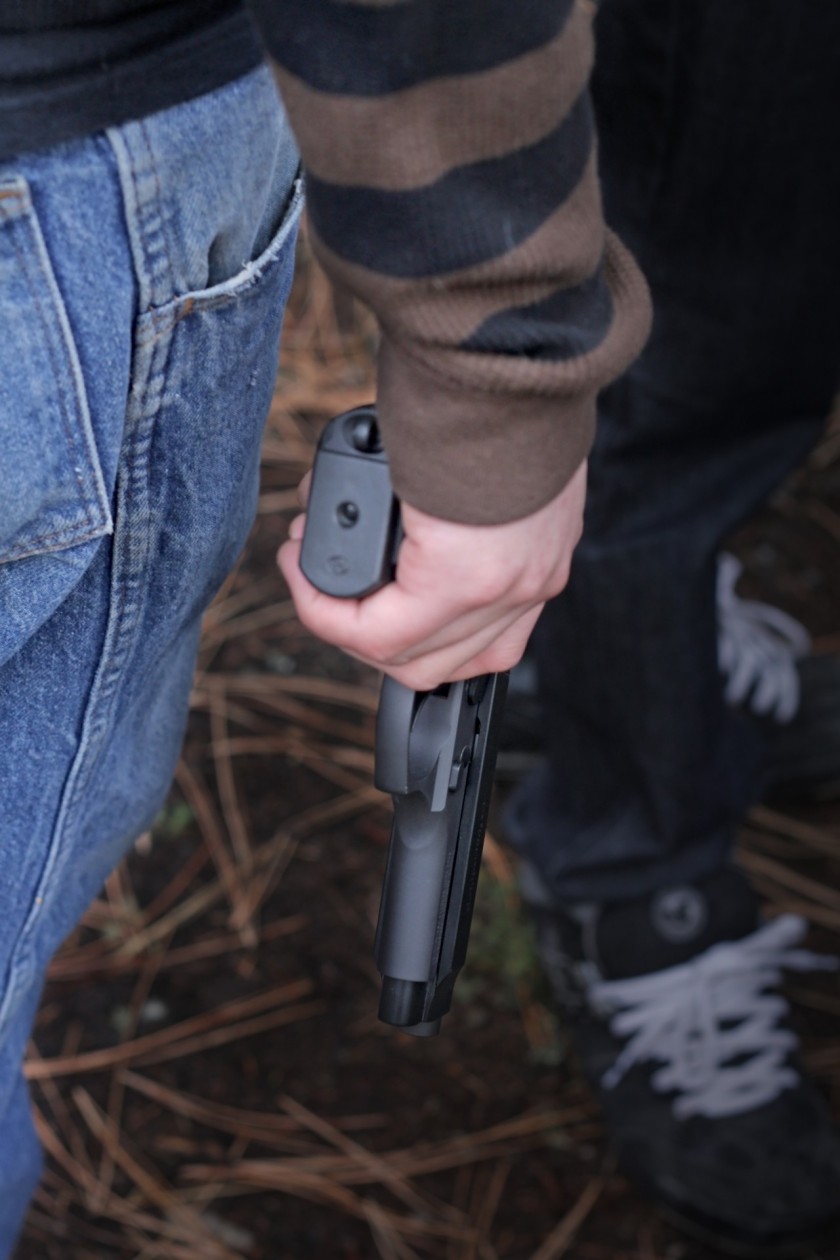 There has been another terrible shooting in a public school. This time seventeen students  and faculty members were murdered by a fellow classmate. Some, like “Aaron Feis” a beloved coach, gave their life in order to protect others. Evidently, the FBI dropped the ball on not taking the threat seriously. Regardless, we are left in the aftermath of it all with a large number of family and friends who are devastated by the loss of life in a very brutal way.

Unfortunately, no time was wasted before the pundits on both sides began offering solutions to the problem. The chorus of anti-gun advocates rose to an ear-shattering crescendo, as they demanded that the federal government add yet more laws to ensure that guns are not found in the hands of U.S. citizens. They may use phrases like “we just want to keep the guns away from the mentally ill or clinically depressed…we are not advocating the total removal of all guns. We still appreciate hunters (for now), but the 2nd amendment in the Bill of Rights needs to be modified somewhat. Semi-automatic weapons are too dangerous for common citizens. Those types of weapons need to stay in the hands of professionals; a.k.a. the government.”

On the other side of the aisle, we have the right-wingers whose solution is to get guns in the hands of more people. Concealed carry is the way to go, but not on school grounds. For that the answer of conservative sounds strangely like those on the left; they too want guns in the hands of government workers. Moreover, though they disagree with those on the opposite side of the aisle politically, they too will agree that we need to keep guns out of the hands of the mentally ill.

Which side is right? Which side is truly offering a sound solution to the problem? Don’t get me wrong, I agree more with those on the conservative side of the fence more than I do with those who dawdle on the left, but applying a band-aid to a festering boil will not really heal it. Will it? No. The band-aid may catch the puss oozing out of the wound, and it may temporarily remove the eye sore from the public’s eye, but it is not a genuine solution to the problem.

First off, I want to be clear on the 2nd Amendment. The purpose of the law is to protect the citizens from tyrannical governments.[i] Hunters were surely covered under this, but they were not the primary consideration. The amendment reads as follows: “A well-regulated Militia, being necessary to the security of a free state, the right of the people to keep and bear Arms, shall not be infringed.”[ii] Some may argue, “but isn’t the constitution and the bill of rights a living document?” In other words, is it possible to reinterpret these documents in leu of today’s society and cultural convictions? Surely, the original framers didn’t understand what is going on today.

While, we may argue that our technology is more advanced than those who have come before us, it is an arrogant assumption to believe that we are somehow superior. You see, there were wicked, evil people alive in their day just like there are in our own. The idea of self-defense was what drove the writing of our countries most important documents.

Who were they afraid of? Ultimately, those in government. That is the foundation for the 2nd amendment, but that is not to say this is where their thinking on the subject ended. In short, they accepted what sadly what so many are unwilling to admit today…people are hateful, selfish and driven by evil desires. The catchphrase today is “mentally ill.” People who commit mass-murder are mentally ill. People who rape children are mentally-ill. People who are drunks, druggies or are guilty of any other unsavory practice in our society are mentally ill.

Don’t call them bad. Don’t call them evil. Don’t call them wicked. They are just a bunch of victims. They can’t help the way that they are, they are just mentally unstable. So, when a horrible event happens like it did last week in Florida all the masses can say is that we need to keep guns out of mentally ill people’s hands. By removing guns and updating the 2nd amendment to the constitution, we can protect the innocent from being hurt.

There are two problems with that philosophy. First, it is assumed that by increasing the number of laws, the mentally ill are less likely to hurt those who do not suffer from such limitations? More gun banning laws equals less gun related crimes. Uhm…excuse me…who were the ones shooting people in public schools since columbine? Law-abiding citizens or criminals? Criminals…right…so…nope cannot follow the logic there.

Neither could the author of the Declaration of Independence. Thomas Jefferson wrote on the same topic being debated in our day, back in his. He said, “Laws that forbid the carrying of arms laws of such a nature. They disarm only those who are neither inclined nor determined to commit crimes.… Such laws make things worse for the assaulted and better for the assailants; they act rather to encourage than to prevent homicides, for an unarmed man may be attacked with greater confidence than an armed man.[iii] He was not alone as historic records prove. As the primary author of the beloved Bill of Rights George Mason once said on the 2nd amendment: “Sir, what is the militia? It is the whole people. To disarm the people is the best and most effectual way to enslave them.”[iv]

Herein lies the second problem with the philosophy mentioned above, these rights cannot be annulled, challenged or changed by any form of government or majority consensus of the current population. Why? Because, according to the Constitution of the United States these rights are inalienable. I know big word, some of you might have fallen asleep right there, if you haven’t already…you know discussion of history and all (LOL). The term “inalienable” means that the rights mentioned in Bill of Rights cannot be “incapable of being alienated, surrendered, or transferred.”[v] The short answer is that liberal, gun-haters, progressives, even radical conservatives, be they democrat or republican…you are not authorized to touch, tamper or molest our freedom to bear arms. Guns are staying, and the moment people extinguish those rights, the freedom’s we possess (and are seemingly losing at an alarming rate) will be terribly hampered.

Although I said earlier that I agree more with my conservative leaning brethren in this nation, the solution of getting more and more guns in the hands of the people will still not solve the problem. True, a criminal will be less likely to attack those who are not easy targets, but there is a deeper issue than guns, their number, and their use. Our culture is inundated with a pluralistic, relativistic mindset, founded upon evolutionary dogma. Pluralistic in the sense that many gods, goddesses, and other so-called authorities are appealed to as if they are all equal. Relativistic in the sense that truth has become as fluid as water; having lost all meaning.

Honestly with just those two, how in the world can anyone argue for or against anything? To make matters worst we have our children saturated with evolutionary dogma, which has stripped all the preciousness out of life. We are nothing more than pond scum, bacteria laden accidents that have came up from chewing on our favorite treats, fleas. Survival of the fittest has been the gospel call of Darwin’s teachings. The sharpest teeth, the most lethal claws, and the strength of the mighty has determined who survives and who dies in this world. These are the things that we teach in public schools. The intrinsic value of human life is lost.

What is most telling, is the double-talk that these same people do without a second thought. You see, we teach our children from a young age, “you cannot really help what you are. How you feel, truly defines what you are. We need to let people find themselves…find out who they really are.” Subjectivity is the real rule of law, the law of natural order. Discipline is archaic. Teaching true responsibility is outdated. And yet, the complaining chorus can be heard through every news outlet and social media source you can think of.

Don’t call people evil, don’t say they are bad, or that they are doing wicked things. No, that doesn’t make any sense. Instead, we should point to the object which lays dormant until someone picks it up, loads it, aims it, and then pulls the trigger at their fellow man. Let’s call the young man who shot those innocent people in that Florida high school what he really is: A sinful, hateful, selfish young man who took literally what our society has taught him to its final logical conclusion. He is a murderer and should be put to death. Not out of hate, but because the punishment fits the crime. He knew full well what he was doing when he mowed down his fellow students and teachers.

Instead of feeling sorry for him and attacking people/organizations like Donald Trump and the NRA, we should admit the truth such individuals are deserving of the death penalty. “Whoever sheds the blood of man, by man shall his blood be shed, for God made man in his own image” (Gen 9.6). Rather than putting the burden of this man’s crimes on the innocent, by making tax payers fit the bill for his so-called rehabilitation, send him a minister of the gospel, point out his sin, and wish him well. Either, he will confess and repent of his sins trusting in Christ, to which I say Amen; or, he will go where he’s wanted to go all along…to hell in a hand-basket (cf. Prov 8.36).

My heartfelt prayers go out for the true victims of this tragedy. However, until this nation is brought to its’ knees in genuine repentance, then the spiritual boil’s we are witnessing on many fronts will continue to appear, fester and grow.

[i] Elbridge Gerry, a representative from the state of Massachusetts once argued, “What, sir, is the use of militia? It is to prevent the establishment of a standing army, the bane of liberty…Whenever Government means to invade the rights and liberties of the people, they always attempt to destroy the militia, in order to raise a standing army upon its ruins”—Debate, U.S. House of Representatives, August 17, 1789. “Quotes from the founding Fathers on Our Right to Bear Arms,” The Federalists Paper’s Project, accessed Feb 23, 2018, https://thefederalistpapers.org/second-amendment-2/famous-quotes-from-the-founding-fathers-on-our-right-to-bear-arms. Italics added.

[iv] “The Founding Fathers on the Second Amendment,” The Federalist Papers Project, Speech in the Virginia Ratifying Convention, June 14, 1778, accessed March 20, 2016, http://www.thefederalistpapers.org/history/the-founding-fathers-on-the-second-amendment. This quote was used on an Ethic’s paper entitled, “The Right to Bear Arms: Outdated or Relevant to Today’s Christian Culture?” submitted on April 11, 2016 at Luther Rice Seminary in Lithonia, GA.